Colfax-Mingo Community School District strives to prepare English Learners who are socially and academically confident, bicultural, and multilingual through welcoming and engaging students and their families in the educational process.

There are two main goal areas for our Language Instruction Educational Program (LIEP): language and academic. English language proficiency LIEP Goal: The average time for an EL to exit the EL program will be less than four years.
Academic Goal: Decrease the percentage of non-proficient ELs in reading and math on the statewide assessment. 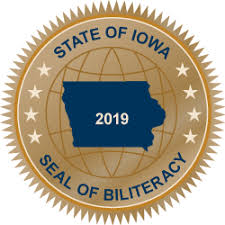 The State of Iowa adopted the Seal of Biliteracy in 2018-19 to officially recognize high school graduates who are literate in more than one language. Colfax-Mingo High School offers the Seal of Biliteracy to graduating seniors who demonstrate proficiency in English and at least one other language through approved assessments. Students must be able to read, write, listen, and speak in the language in which they test.